Previously we’ve looked at how we can use @DisplayName and @Nested inner classes to improve the readability of both our test reports and the test code itself, and also to reduce some of the boilerplate. However, when we have tests which are largely identical, as is the case with the test suite we’re looking at, we can further simplify things and reduce boilerplate.

Let’s take a look at our existing tests to see quite how similar they really are. Consider these two:

The first represents the “When...” clause and the only difference is the Operator which gets applied – in the first test it is Operator.PLUS, and in the second it is Operator.MINUS. The rest of the line is identical.

The second represents the “Then…” clause and the only difference is the expected value which is the argument to the isEqualTo() method call. The rest of the line is identical.

The obvious optimisation that we can do here is to extract the test to a separate method and pass in these two variable components as arguments:

That actuall is beginning to look pretty good. We’ve taken out much of the repetition and now the full JUnit 5 test suite has been reduced to 110 lines.

But we’re not going to stop there. There is actually another new feature of JUnit 5 which can further simplify things: Dynamic Tests. Before we proceed, it is worth pointing out that Dynamic Tests are still an experimental feature of JUnit 5, but I’ve found them to be quite reliable whenever I’ve had cause to use them.

There are two key components when it comes to using Dynamic Tests – the first is a TestFactory which is responsible for creating a set of tests, and the second is the DynamicTest itself which essentially creates a mapping between a block of code to execute for the test and the DisplayName to use for it.

To access the full power of DynamicTests requires some APIs which are only available in Java 8 onwards – and we don’t have access to them in our Android projects. We’ll cover a bit more on Java 8 later in the series. However they are still pretty useful even with the older APIs.

Let’s begin by looking at the DynamicTest itself:

First we construct the displayName string based on the operator and expected value. Next we create a DynamicTest passing in this string and an Executable object. Executable is an interface defined within the JUnit5 Jupiter API, and requires us to implement a single method named execute(). The contents of this are almost identical to the performTest)_ method we created earlier – the only difference being that performTest() had parameters passed as arguments whereas execute accesses final arguments passed to the parent method.

Essentially this enables us to create both the test code and the appropriate DisplayName dynamically based on the parameters passed in.

Now we need to create the Factories which will construct these tests. A Factory simply returns a Collection of DynamicTests:

The TestFactory replaces the @Nested inner class that we used previously, whilst maintaining the same @DisplayName. It does nothing more than create a set of DynamicTest instances and the test platform will iterate through this Collection and run each test in turn, and create a report using the appropriate DisplayName.

If we run this we can see that the report is much the same as before except for the case of the operator name resulting from generating this dynamically: 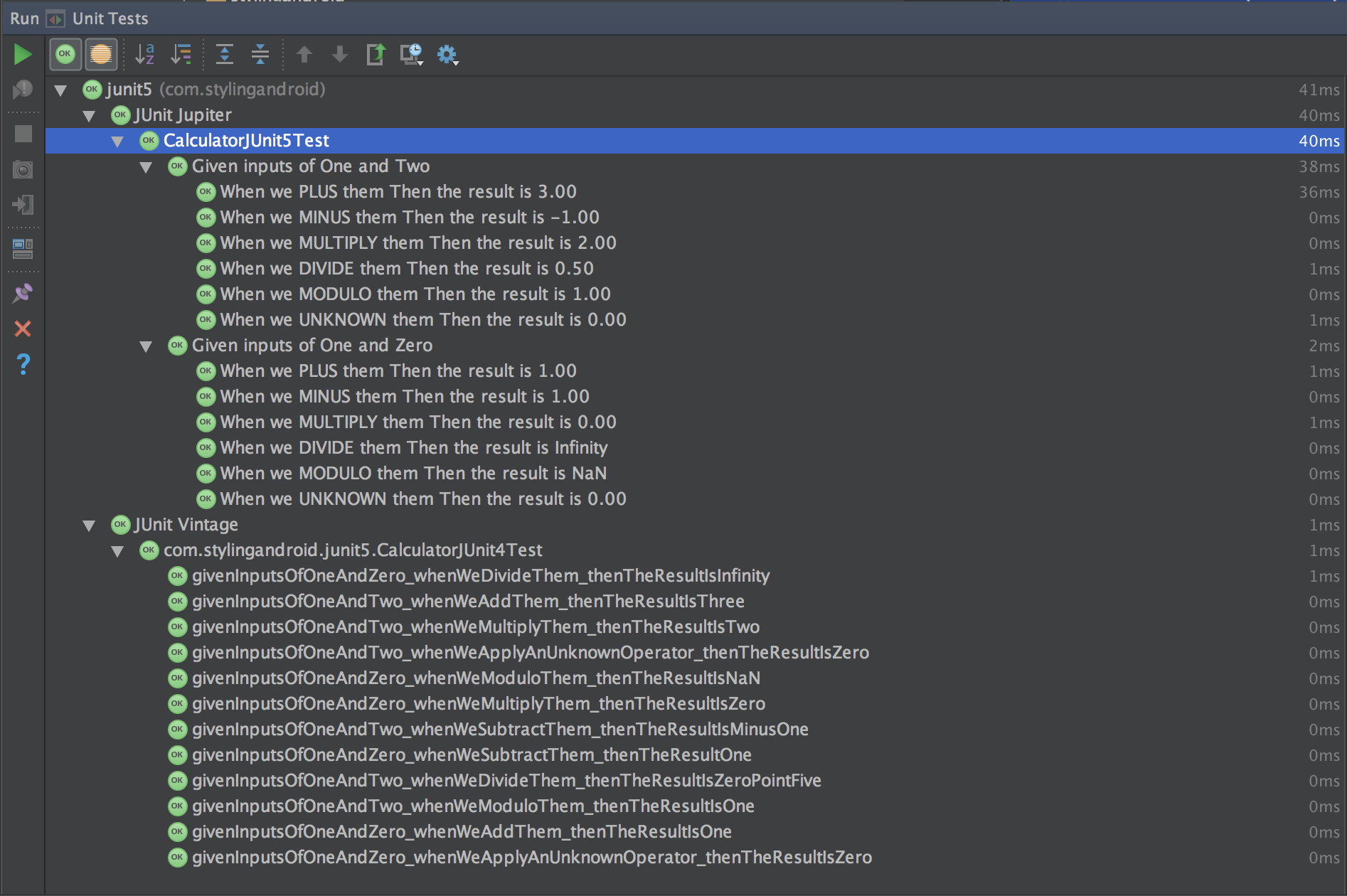 For the first time I’m now going to include the entire JUnit 5 test suite because this set of changes finally reduces the same set of twelve test down to a really terse 67 lines:

This is finally getting to a point where we have quite a full set of tests which are nicely compact. As a result of this I now feel that they are much easier to read and understand, so are much more fit for purpose as documentation of the expected behaviour of the system under test.

However, we’re not going to stop there. Those familiar with lambda expressions will have noticed that the Executable that we created as part of our DynamicTest is a perfect candidate for replacement with a lambda. In the next article in this series we’ll look at the various options for using lambdas in our tests.