With Marshmallow a new permissions model was added to Android which requires developers to take a somewhat different approach to permissions on Android. In this series we’ll take a look at ways to handle requesting permissions both from a technical perspective, and in term of how to provide a smooth user experience. 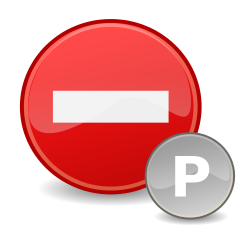 Before we get stuck in it’s worth pointing out that permissions required by an app really fall in to one of two categories: Those that are core to the app’s operation – the app cannot function correctly without those core permissions; and those that are required for more peripheral features. For example, For a Camera app the CAMERA permission is part of the core functionality – a Camera app which couldn’t actually take any pictures would be pretty useless. However, there may be additional functionality such as tagging the picture with the location where it was taken (requiring ACCESS_FINE_LOCATION) which is a nice feature, but the app can operate without it.

So we’re going to start work on an app for the next series of posts, but it actually requires two permissions for it to be any use whatsoever: RECORD_AUDIO and MODIFY_AUDIO_SETTINGS. In order to obtain these permissions we need to declare them in the Manifest as we always have:

This has been the standard way of declaring permissions on Android since API 1. However, as soon as we specify targetSdkVersion 23 or later we also need to request the permissions we require at runtime. That is really important because there have already been many examples of developers who have simply bumped their targetSdkVersion to the latest, and then found their app crashing in the wild because they haven’t implemented the necessary code to request permissions at runtime. This is even more of an issue when you consider that once you have released an app targeting API 23 or later to Google Play, you cannot subsequently replace that APK with one targeting an earlier version.

Another thing worth mentioning at this point is that there are a number of libraries designed to simplify the runtime permissions request process. These vary in both quality and usefulness but I feel that it is essential to understand the underlying process before using such a library otherwise you could end up with problems becaue you simply do not understand what your library of choice is actuallydoing. This is the primary motivation for this series of posts.

The first thing that we need to do is part of this process is firstly determine whether we have been already granted the permissions we require. In API 23 some new methods were added to Context to check whether specific permissions have already been granted. However, it’s always good to use ContextCompat instead of accessing Context directly and having to include your own API-level checking:

It is worth re-iterating what ContextCompat does for us here. The checkSelfPermission() method will always return PackageManger.PERMISSION_GRANTED when running on pre-Marshmallow devices which do not support the new runtime permissions model – the permissions are implicitly granted on older OS levels, so we simply have one method call which works across all OS levels because of the Manifest declaration, and we don’t need to write any API-level specific checks in to our code.

Just in case you’re wondering why I have created a specific class for this it is because later on we need to make these checks in all of the Activities within the app so having the checking logic separate from our Activity makes for less duplication and improved maintainability of our code.

So to actually use this in our Activity we simply call it with the list of permissions the Activity requires:

So that is actually fairly straightforward.

This will work as-is on pre-Marshamllow devices: 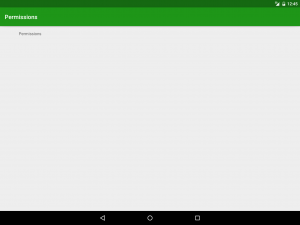 But we don’t yet have any missing handling for Marshmallow and later – we just display a Snackbar: 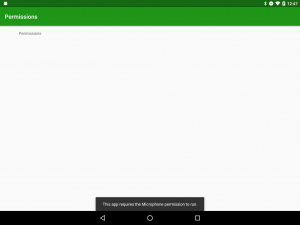 Requesting missing permissions is where some complexity begins to creep in. We’ll look at this in the next article.