In this series of articles, we’ll take a look at transparency and how we can use it within our UI to create some nice effects. In this article we’ll have a look at some of the basics.

One of the fist things Android developers need to learn when putting together Android UI and layouts is how to specify colours using “hash” notation such as #FFF, #FFFFFF, or #14A804. These represent the red, green, and blue components which comprise the colour that we are declaring as #RGB or #RRGGBB. In addition to these 3 colour channels there is another, optional channel which we can use to control the transparency of the colour. This is called the “alpha” channel, and prefixes the colour declaration: #ARGB or #AARRGGBB. When no alpha value is specified then the alpha defaults to 0xFF which is 100% and is completely opaque.

On the face of it, that seems pretty straightforward, but there is a degree of subtlety involved with transparency. Consider the following layout fragment:

The important thing about this is that transparency is totally dependent on the context of its *background*. A transparency will become invisible over a background of the same colour. Sometimes this can be desireable, but sometimes is can be a nuisance depending on what we’re trying to achieve!

If we change the black and white background blocks to be a gradient running from black to white we can see this even more clearly:

Understanding that transparency becomes a function of its background is fundamental to getting getting good results. Much of the time we simply use transparency over a fixed background, and the end results are clearly visible. However there are times when we may be using transparency over, for example, and image from the image gallery on the device and so we need to think carefully about how it will look over all potential backgrounds.

Another way that we can use transparency is actually on a gradient itself. Let’s define a new drawable:

This defines a gradient where the colour doesn’t change it both starts and ends as black, but the alpha changes from 100% to 0% over the course of the gradient. If we create similar drable for grey and white and overlay these over the same backgrounds as before we get the following: 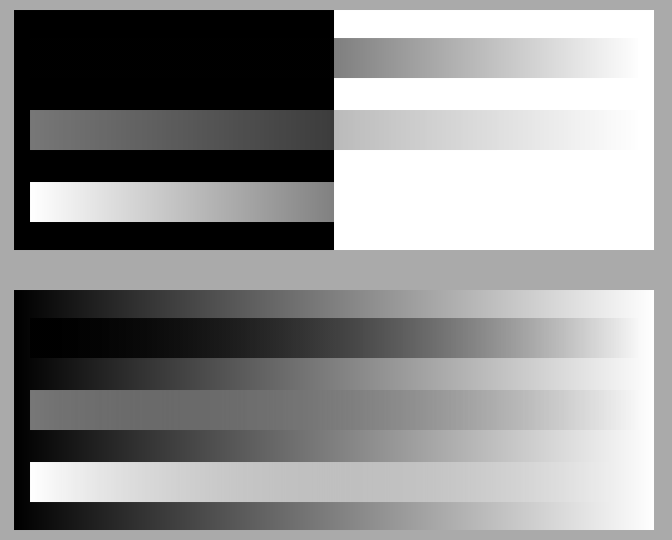 Once again we see the black and white transparency disappear over the white and black backgrounds, but now all of the transparencies disappear at the right hand edge. The illusion is that they are turning white, but this is only because the background is white at this point.

So that’s a brief primer on some important aspects of using transparency, but the examples that we’ve looked at have been designed to demonstrate the concepts and have little real-world value. In the next article we’ll have a look at some concrete examples of how we can use transparency within our UI.