In the previous article we looked at getting our ListView scrolling smooth by optimising the operations that we are performing in the getView() method of our Adapter. In this article we’ll look at adding images to each ListView item and consider the performance implications of doing that.

Actually adding images to the list item is easy enough, but we’ll compound the problems we face by not only loading images (which is an expensive operation), but also retrieving them from the cloud (another expensive operation). Neither of these operations should be performed in our getView() method, or indeed on the UI thread. To demonstrate this we’ll create a ListView which loads all of the emoticon icons from the Android AOSP source on github.

First we create an item layout which contains an ImageView:

We’re also preempting something that we’ll require later on – a ProgressBar to display in place of the image while we’re loading it.

Our Adapter is pretty similar to what we’ve used previously, we’re just overriding getView() and doing the same view recycling and caching that we’ve done previously:

One thing to note is that we’re not even attempting to bind anything to the ImageView control within our getView() method – we’re going to do this in a Loader to keep the heavy image download and decoding operations outside of our getView() method, and off of the UI thread. For a fuller discussion of this, please refer to the series on Background Tasks.

First let’s look at the ViewHolder, which does rather more than the simple state holder that we used previously:

The entry point is the setName() method. This is called from our getView(), so needs to be really efficient. It sets the text in our TextViewProgressBar, hide the ImageView, and then restart the Loader (which will create it, if necessary). It is worth noting that we try and keep object creation to an absolute minimum – as these are expensive operations – so we reuse the Loader wherever possible, and also reuse the Bundle object that we use to pass parameters to our Loader.

The final component is the Loader implementation itself:

What we’re doing here is determining the device pixel density so that we can get the correct image for our device. Note that only ldpi, mdpi, hdpi, and xhdpi versions of these images are provided on AOSP, so we only support these.

We then load the image from github by constructing the URL, loading the content and decoding it to create a Bitmap object (all rather expensive operations) within the loadInBackground() method.

If we run this we see he following: 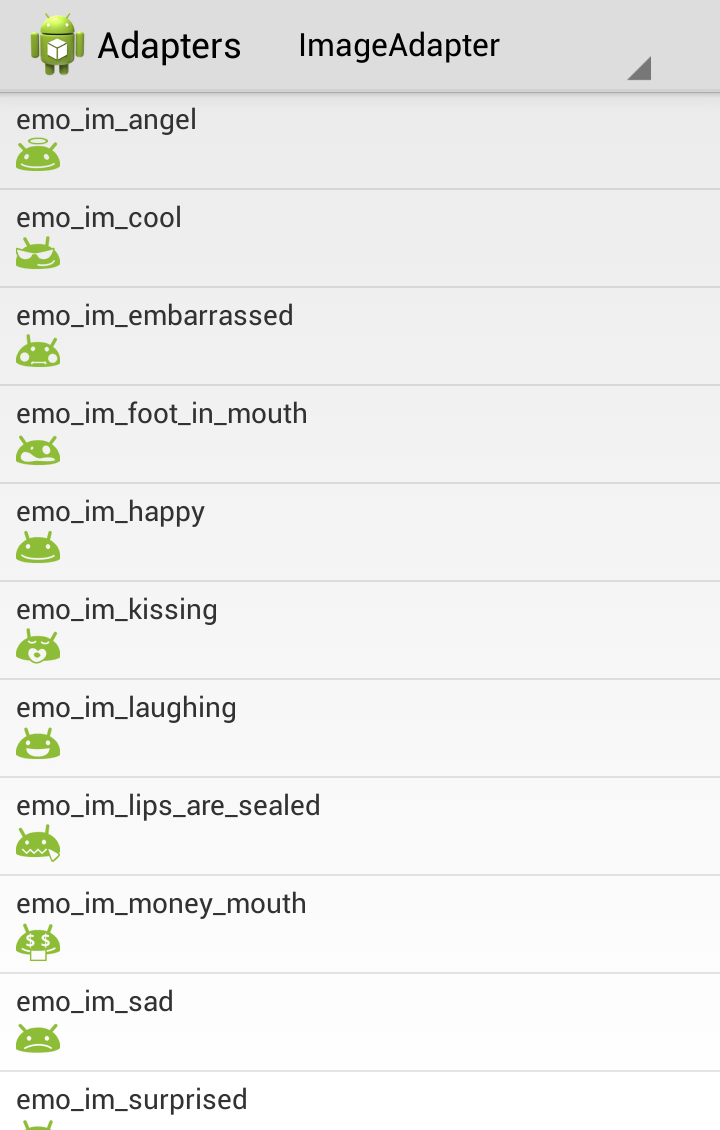 However, you’ll have to try it out for yourself to see how the ListView scrolling stays smooth.

It is worth pointing out that the code in this article is designed to demonstrate how to keep your ListView scrolling smooth, and your UI responsive, so I have tried to keep the code as simple as possible so that it is clear that the expensive operations are performed in the correct place. However, there are some omissions which should be addressed if you were to attempt to use it in a real app:

In the next article we’ll look at binding a ListView to a SQLite database.