So let’s take a look at the changes that we need to make to the project that we’ve used in the previous articles in order to use VectorDrawableCompat. The first thing that we need to do is make the modifications to our build.gradle file that Chris explains in his post.

For the sample code I’m using Android Gradle plugin 1.5.0 and not the newer 2.0.0 beta one. The reason for this is that the beta plugin has built in expiry, and I prefer to publish sample code that should compile in weeks and months time – I’ll happily move to 2.0.0 once a stable version is released. That said, we need to make the following changes (it’s different for 2.0.0 – see Chris’ post for details – but I’ve tested that method as well and it works perfectly):

What this does it essentially turn off the auto-generation of PNG assets from our VectorDrawable ones which was a previous way of doing things.

The next thing that we need to do is switch to app:srcCompat instead of android:src for the ImageView in our layout:

That’s all there is to it! Our Activity already extends AppCompatActivity which is the other prerequisite.

the only minor niggle here is that Android Studio (I’m using 2.0 beta 6 at the time of writing) doesn’t recognise the app:srcCompat attribute and so gives an error. But everything compiles correctly. We also get a few false lint warnings but these can be suppressed, if necessary. I expect these false errors & warnings will be fixed fairly soon.

So if we run that on a Marshmallow device all looks good, as we’d expect: 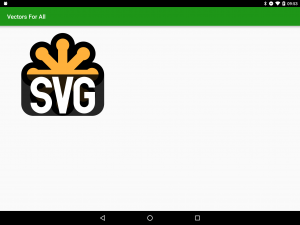 And if we run it on a Jelly Bean emulator it looks pretty much identical: 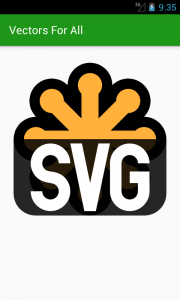 So what about AnimatedVectorDrawableCompat? Let’s re-visit the samples from the Styling Android series on VectorDrawable to see how they work.

We modify the project in much the same way as we did before – one difference is that we need to change our Activity to extend AppCompatActivity this time. So let’s step through our examples:

First there is the static Android logo: 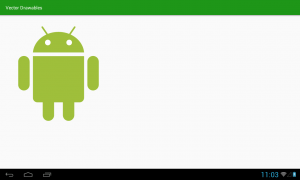 As this is a static VectorDrawable we’d expect it to work, and it looks great. What happens when we animate it (these examples are all from a GenyMotion JellyBean emulator):

The frame-rate is pretty good – and this is on an emulator rather than a real device! Obviously frame-rates will be worse on lower powered devices, and we’re likely to encounter many more of them when targeting earlier versions of Android, but the results are pretty impressive, nonetheless.

So how about the trimPath animation?:

Once again, this is pretty impressive – it works as it should and is very smooth.

The final example from the previous series does not work, sadly. This is because it directly animates pathData and, as Chris mentions, this is not currently supported by AnimatedVectorDrawableCompat. However Chris does use the word “currently” – so perhaps a future version of the library will support this extremely powerful feature.

So that’s it for the Compat library – it really does perform well and is pretty easy to integrate in to your current app. A massive hat tip to Chris and the rest of the team who have worked on bringing this functionality to the masses.

So, let’s now turn our attention to the other aspect of using vectors in our apps – actually converting SVG assets in to VectorDrawable. Previously we saw how there were some omissions in the SVG support which meant that we were unable to import the official SVG logo (which should be considered a benchmark for basic SVG support) using both Android Studio import and the third party SVG to VectorDrawable tool. There’s good news and there’s bad news.

First the bad news: Sadly Android Studio still does not import the logo without errors – I’ve tested on Android Studio 2.0 beta 6, and it’s still not supported.

However the good news is that shortly after I published the last article in this series I was contacted by Juraj Novák (the creator of the third party tool) to say that the missing missing support for local IRI references (see my earlier articles for a explanation of this) had been added. There is one small caveat: You must select the “Bake transforms into path (experimental)” option when converting the SVG logo asset but, provided you do, it is converted faithfully in to a VectorDrawable xml which you can drop in to your project.

There is still no support for SVG gradients and patterns, but this is because they are not supported in VectorDrawable itself – only SVG path data is actually supported.

With Juraj’s conversion tool, and the new VectorDrawableCompat library this stuff really now is ready for the mainstream. So get out there and Vector, people!

There is updated code supporting the Compat library for both the previous Vectors For All posts and VectorDrawable.