We’re edging closer to get our material-like circular indeterminate drawable working, we just need to fine tune our Interpolators to get closer to what the Lollipop+ implementation is doing. The trick for doing that it to use something that I mentioned earlier in the series PathInterpolatorCompat.

So let’s have a look at how we can do this. The SVG path data that we looked at in the Lollipop+ implementation is actually divided in to to parts: a straight line, and a cubic bezier. Path supports both of these so we just need to map thing appropriately:

If we actually run that we’ll see that it’s close but not quite what we’re after. Even though we’ve copied the paths used to create the start and end point interpolation what we haven’t taken in to account is the trimPathOffset animation which was used to prevent from the leading edge catching up with the trailing edge. While we could try and factor that in to our Drawable we actually don’t need to if we factor it in to our Paths used for the interpolators instead. The trick is that rather than remaining static during the line phase of the Paths, we actually move slowly instead:

This changes our paths from this: 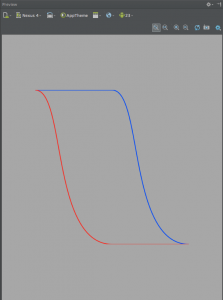 If we try it with those tweaks to the Paths then we get pretty close to the Lollipop+ implementation:

It’s pretty difficult to tell the difference although there is a very occasional glitch when the rotation animator finishes and restarts (you can see it towards the end of the video) but it is only occasional so I can live with it.

Just to prove that it truly is backwardly compatible here’s the same thing running on a Genymotion 4.1.1 emulator. Note how the native ProgressBar is rendered as a Holo-styled one:

That concludes our look at creating our own indeterminate progress bar and we’ve met a new friend along the way: PathInterpolator!